Today— more than ever— we are experiencing a tolerance crisis.  Our political landscape has 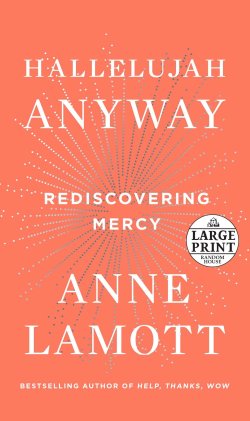 polarized into warring ideological camps whose central occupation is defending their own belief’s fortress.  Division seems to capture the spirit of our age as the very fabric of society has begun to unravel along racial and cultural lines— lines we thought we transcended half a century ago.  Rather than build bridges of tolerance and understanding, we erect barriers of bias and bigotry until more and more we conceive of those different from us as unworthy of mercy— that miraculous human ability to forgive the unforgivable.  But why should we be merciful to those we deem loathsome?  Why pardon when we can punish?  Why forgive those who’ve done us wrong?

For writer of soul-stretching wisdom and heart-warming honesty, Anne Lamott, author of Hallelujah Anyway: Rediscovering Mercy, we can only learn to extend mercy to ourselves if we extend mercy to others.  No where is this more true than in friendship.  “Friendship is a mirror to presence and a testament to forgiveness,” poet and philosopher David Whyte writes in his lovely redefinition of the not-often-pondered concept of camaraderie, “Friendship not only helps us to see ourselves through another’s eyes, but can be sustained over the years only with someone who has repeatedly forgiven us our trespasses as we must find it in ourselves to forgive them in turn…All friendships of any length are based on a continued, mutual forgiveness.  Without tolerance and mercy all friendships die.”  Fearlessly honest about her own foibles and frailties, Lamott recognizes that humanity and inadequacy are one and the same.  To be a friend is to see another in their all too human defects and deficiencies and accept them anyways.  More importantly, to be a friend is to bare our splintered souls in all their imperfection and realize we’re still worthy of connection, of love, of belonging.  With her distinct blend of good humor and nurturing, motherly insight, Lamott argues there are two paths to living a more merciful life:

“There are many routes to living a merciful life in this mean and dangerous world; assorted ways to find and extend inclusion after lives of cheeky isolation; a number of walkways to awakening and gratitude.  And there are two goat paths to the peace of self-forgiveness.

The first is to get cancer.  All the people I’ve known who have received a terminal diagnosis have gotten serious about joy, forgiveness, simple pleasures— new green grass, massage, cherries, the summer’s first peaches— and have been able to find good-enough peace toward people who did unforgivable damage to them and their families.  They know they are going to die one of these days, but maybe not today, so they live, savor, rest, wake up kind of amazed.

The second is to fall in step with a teacher, briefly or forever, a real teacher who makes it clear that even as he or she points to the moon, we have got to stop staring at the person’s fingers.  If we want freedom from grudge, we will at times need wise counsel- teachers, with flashlights.  Forgiving rat finks who have betrayed a beloved, let alone forgiving one’s own disappointing self, is grad school.  Without these studies, we live so small.  Every one of us sometimes needs a tour guide to remind us how big and deep life is meant to be.

Mercy means that we no longer constantly judge everybody’s large and tiny failures, foolish hearts, dubious convictions, and inevitable bad behavior.  We will never do this perfectly, but how do we do it better?  How do we mostly hold people we’ve encountered with the understanding of a wise, caring mother who has seen it all, knows that we all struggle, knows that on the inside we’re as vulnerable as a colony of rabbits?

Sometimes when we cannot take it one more day, like the renowned octopus who recently escaped his aquarium and headed toward the sea, a mentor appears, who knows things, and more important, knows that he or she does not know things.  We want what the person has, a gentler way of seeing, a less rigid way of thinking, less certainty, more play.”

Battered and broken after years of alcoholism, Lamott confesses that when she finally trudged through the doors of Alcoholics Anonymous, she despised herself.  How could she have so much— a loving, loyal family, good friends, several books— and still be so bent on destroying herself?  Though she’s horrified by her own sick, self-defeating behavior, the newly sober Lamott finds comfort in confiding in Loretta, a fellow alcoholic who offers a cup of coffee and a kind, nonjudgmental ear:

“Thirty years ago, one week after my last drink, on a hot July afternoon, a tall and rather plain woman came up to me in a room of sober people.  She extended her grimy hand to me.  She was a gardner.  I found out she had been a junkie, and had gotten clean ten years earlier at the alternative drug rehab in Synanon, famous for having had two of its members put a rattlesnake in the mailbox of an antagonistic lawyer.  She was funny but seemed to be in a bad mood.  I was, too: I had woken up days earlier, hungover and in deep animal confusion, as I was most mornings: Why couldn’t I stop drinking after six or seven friendly social drinks?  Finally the exhaustion of living this way had propelled me to a group of people who had somehow found a way out, a path with one another’s company and bad coffee, people who were laughing about their crazy thoughts and pasts.  Most of them were overly cheerful, but Loretta was cranky, and I like this in a girl.

She got me a cup of coffee with four sugars and we sat in a corner.  She listened to the bones of my story: I was thirty-two, with several published books, and the local love of my family and lifelong friends.  I was loved out of all sense of proportion, yet I got drunk every day.  I was poor and bulimic, but adorable and cherished.  There was one problem: my insides…My mind and spirits and behavior were deteriorating faster than I could lower my standards.”

In a moving moment recalling Seneca’s conviction that “one of the most beautiful qualities of true friendship is to understand and be understood,” Loretta responds to Lamott’s story not with denouncement or disgust but with compassionate understanding, a kind of sympathetic “I’ve been there.”  Just as literature reminds us of our shared humanity by requiring we locate commonalities between ourselves and a character whom we deem strange and other, friendship— but a different kind of exchange of stories— confirms we are in this together:

“Then Loretta told me her story: She’d been put in an orphanage after her mother died, although her brothers lived with their father; her cousins gave her a shot of speed at fifteen, which is how she discovered what she wanted to do with her life, i.e. drugs, not knowing of course that this would come to involve turning tricks, alcoholism, and Synanon.  She was smart, with no formal education, a voracious reader, and she had what I wanted, a way of taking each day as it came, mostly with humor and even gratitude.  What she had could not quite be put into words, but the best way to capture it may be to say that she knew what wasn’t true.”

Friendship requires the barest vulnerability: to forge long-lasting bonds, we must be willing to divulge all of ourselves— both our assets and our shortcomings.  But it’s terrifying to share our selfishness, our small-spiritedness with another.  What if they can’t forgive us our trespasses?  what if they realize we’re shitty?  What friendship teaches Lamott is human beings are united in their fallibility.  Among A.A.’s congregation of prostitutes and drug addicts and cheating husbands and neglectful mothers, Lamott makes the ultimate confession and discloses herself at her most disgraceful: how she drinks everyday, how she throws up after every meal.  Like a repentant sinner, she seeks redemption but worries her misdeeds will forever bar her from the paradise of human belonging.  Instead what she finds is the women she encounters welcome her whole-heartedly.  They don’t criticize or condemn but rather offer a cookie and a cup of coffee.  But their greatest consolation is two simple words, “Me too.”  The fact that these women (who admit to also having done awful, unutterable things) still love her and themselves heartens Lamott’s soul.  When others so ungrudgingly grant us mercy, we realize we should be more merciful to ourselves.  A restorative cure for our society’s pathological perfectionism, Hallelujah Anyway maintains we’re still lovable— even though we’re only “mostly,” not completely, redeemable:

“We hung out with these other women, who had betrayed their families and deepest values, and who told me, ‘Guess what?  Me, too.  I have those secrets, that self-obsession.  It’s okay.  Let me get you some cookies.’

We were so much the same, except for our histories.  We’d been such good girls, able to tell ourselves that our parents were okay, they loved and would protect us, even as we were scarred by their unhappiness.  Then the world got its mitts on us, no matter that we put our best shining faces forward, and we stayed alive however we could.  We grew into women with big hearts, scars and dark secrets, mostly gentle and kind, mostly generous, with areas of weakness and craving.  When I was a child, I knew a fabulous dog named Mostly, who was mostly beagle, mostly a love bug who every so often bit one of us, although not all that hard.  Loretta and I were mostly okay.”