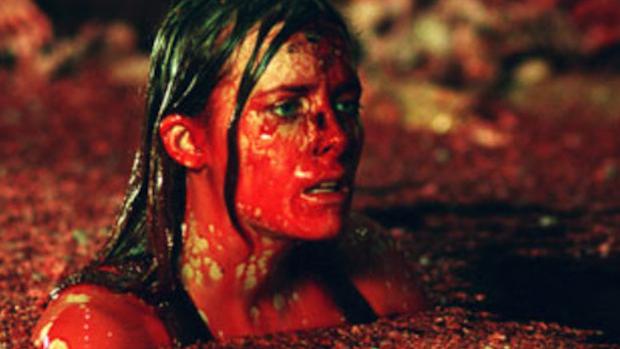 British horror thriller The Descent is probably one of the most original scary movies of our time. There’s no sensationalistic violence or needless gore here. Instead of rely on the obvious, cliched gags of the horror genre, The Descent plays on our most primal fears: fear of enclosed places, fear of the dark. The title may literally refer to six women’s harrowing drop into the depths of an eerie cave system, but it equally refers to their horrifying descent into unimaginable madness and terror. Below the surface, each woman finds herself in a kind of hell, an inferno where nightmares are realized and man is reduced to his most savage form.

After suffering the loss of her husband and daughter, Sarah (Shauna MacDonald) is devastated and emotionally fragile. To help her heal, her best friends Beth (Alex Reid) and Juno (Natalie Mendoza) plan a girls trip away. But this is no mimosa and bed and breakfast type trip- the girls plan on trekking through the Appalachians and exploring its hidden caves. If writer-director Neil Marshall does anything well, it’s violate our expectations. Apart from featuring an all-female cast (a move virtually unprecedented in horror flick history), Marshall chooses a bunch of bad-ass adrenaline junkie chicks as his stars. I’m not going to lie: the feminist in me was satisfied to finally see women escape their helpless damsel-in-distress roles and scale cave walls. In fact, The Descent indulges in no screaming, pitiful pleas of spare me: when cave-dwelling monsters show up 40 minutes later, Marshall’s women remained tough and determined and defend themselves.

Marshall and cinematographer Sam McCurdy do a spectacular job of creating a near unbearable sense of claustrophobia throughout the film. Though enclosed spaces aren’t scary in themselves, the idea of being trapped in a confined cave is enough to give most of us a panic attack. I myself could barely make it through some of the more excrutiating scenes when the girls were navigating through the cave’s passageways. Why? It’s not fear of the cramped quarters-it’s fear of the panic we’ll create for ourselves. In one scene when Sarah gets stuck while crawling through a tunnel, it’s her own anxiety that puts her in danger: “Sarah, just breathe!” her friend Beth tries to comfort her, “Calm down…you just have to breathe.” Much like Sarah, we produce our own fear as we imagine what might be lurking just around the corner in the dark.

What makes The Descent so downright disturbing are not the caves or monsters they encounter (though those are also pretty darn scary), but the demons they must confront while far from civilization. The setting of a cave turns out to be a genius setting for a horror movie; in Freudian psychology, a cave hints at the dark underbelly of the psyche where repressed fears reveal themselves and deviant longings lurk.

The Descent, it seems, is just as much a literal descent underground as it is a metaphorical regression to our more beastly animal nature.  Marshall’s cave setting makes it possible for the women to justify committing the most heinous acts against each other.  In one devastating scene, tough girl Juno is slaying cave monsters left and right only to accidentally kill her friend Beth.  Rather than rush to her aid or even just apologize for stabbing her, Juno looks in horror at what she’s done and leaves Beth to die there.  Sarah also becomes merciless when she takes her revenge at the film’s end and stabs Juno.  If we take the cave as symbolic of the Freudian unconscious, it makes sense that Marshall’s characters turn on each other.  In the real, civilized world, it would be unconscionable to act on our vengeful desires; in the wilderness, it’s perfectly acceptable to stab our husband-stealing friend in the foot and leave her there to be ravaged by man-eating monsters.

In the end, The Descent is not a horror film in the traditional sense- it is an unsettling reminder of our potential for evil.  As the title itself suggests, ruthless barbarism and selfishness are a part of our heritage as a species.  Put good people in dire enough circumstances and they’ll do unthinkable things to each other.