“How could I have known that murder can sometimes smell like honeysuckle?”

For years when I watched Double Indemnity, Walter Neff’s (Fred MacMurray) iconic lines were merely the work of a clever wordsmith, an unforgettable turn of phrase- nothing more.  However, this evocative image is a metaphor for the paramount theme of the film.  A haunting tale of lust, greed and transgression, this cinematic masterpiece explores the disparity between how things appear to be vs. what is real.  In the end, Double Indemnity proves normalcy often belies the disturbing and bizarre: in its universe, a striking blonde dame can reveal herself a duplicitous murderess while an ordinary neighborhood sales man can turn out to be the killer next door.

Cinematographer John F. Seitz’s juxtaposition of sunny Los Angeles with somber interiors suggests a deadly menace can always lurk…even behind the most innocent facades.  As film critic Imogen Sarah Smith notes, from the outside, the Dietrichson house appears to a visiting salesman “almost as desirable as the platinum-blonde housewife who greets him wrapped in a towel.”  A stately staircase of red brick leads to the gorgeous spanish-style mansion while warm Santa Ana winds carry the hypnotic scent of honeysuckle.  But inside the place reeks of stagnation.  Dark and oppressive, the house’s only light sneaks in through venetian blinds, illuminating the dust in the air.  The living room, Neff observes, is still “stuffy from last night’s cigars.”  Like a prisoner, bewitchingly seductive housewife Phyllis (Barbara Stanwyck) is sentenced to a life of tedious domesticity, condemned to endless nights of wearisome silence and Chinese checkers.

In much the same way her glamorous Los Feliz estate conceals an existence of quiet desperation, Phyllis’s beguiling physical allure masks the fact that she’s “rotten to the core.”  Upon meeting her, Neff is immediately enthralled by her sexuality.  “That’s a honey of an anklet you’re wearing, Mrs. Dietrichson,” he flirts ogling her voluptuous figure, a choice of words that foreshadows the later idea that murder smells like “honeysuckle.”  The fact that Neff refers to her provocative anklet as “honey” suggests her sexuality is as tantalizing as the yellow brown nectar.  But just as murder can smell like honeysuckle, beauty can disguise the malevolent and lethal.  Phyllis perfectly embodies this paradox: like an exquisite but poisonous oleander, she uses her womanly charms to manipulate Neff into committing murder.  Clearly, Mrs. Dietrichson is familiar with the phrase “you catch more bees with honey than with vinegar.” 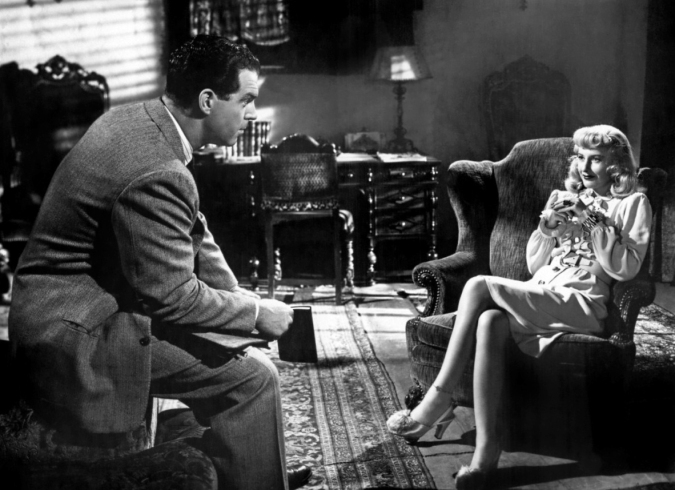 A shrewd salesman who can smell fraud, Neff sees through Phyllis’s concerned housewife act and correctly guesses she wants to buy accident insurance for her husband so she can kill him and collect.  When he realizes her plan, he’s initially appalled but eventually consents to committing murder.  But why?  what motivates a rather ordinary and, for all intents and purposes, moral man to such a heinous act as murder?  Neff has no real motive to kill Mr. Dietrichson besides the fact that he feels a visceral lust for his wife; still, a one-night stand doesn’t seem like enough motive to slaughter someone, especially in so brutal and personal a way as strangulation.  So why does he do it?

“Because,” he confesses in his voiceover, “it was all tied up with something I’d been thinking about for years since long before I ran into Phyllis Dietrichson.  Because you know how it is Keyes, in this business you can’t sleep for trying to figure out all the tricks they can pull on you.  You’re like the guy behind the roulette wheel watching the costumers to make sure they don’t crook the house.  And then one night you get to thinking, you could crook the house yourself and do it smart.”

Neff may seem like your average run-of-the-mill salesman, but he will soon reveal himself a remorseless, sociopathic killer.  Like a veteran cop who becomes convinced he can pull off the perfect crime, Neff begins to think he can outsmart his insurance buddies at Pacific All-Risk and get away with murder.  Despite arguments to the contrary, his decision to slaughter Dietrichson is the result not of lust but of pride, an egotistical longing to pull one over his boss.  Interestingly, it’s Neff- not Phyllis-who gets greedy and pushes for the double indemnity clause, even though accidents covered by this stipulation are incredibly rare and will surely bring the case under closer scrutiny.  Is he enticed by the promise of more money?  No, neither character seems to care much for the 100 grand.  His desire to pull off such a daring plot is purely a matter of ego.  Though many critics interpret Double Indemnity as the archetypal film noir- boy meets alluring but lethal femme fatale, femme fatale leads boy to his doom- Phyllis is the opportunity for the crime-not the motive.

Of all Wilder’s characters, Neff shows that man has two selves: an outer and an inner.  Outwardly, Neff seems charming, smooth-talking but, inwardly, he fantasizes about outwitting the system and harbors disturbing delusions of his own grandeur.  He doesn’t kill for rational reasons, for love, say, or money, or vengance, nor does he kill in a fury of senseless passion- he kills to simply prove he can, no real reason at all.  What’s more terrifying than the thought of a bored housewife secretly plotting to murder her neglectful husband is the idea that a normal man of sound mind can kill without just cause. 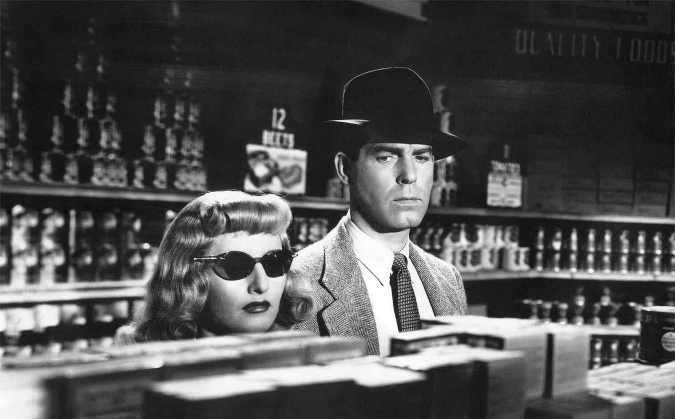 The only redeemable character in Double Indemnity is Keyes, Neff’s boss.  In what has to be the most suspenseful scene in cinematic history, Phyllis is on her way over to Neff’s apartment when Keyes unexpectedly shows up.  “Hello Keyes,” Neff mutters nervously, knowing Phyllis will be there any moment, “What’s on your mind?”  Unlike most claims managers who readily accept the official narrative presented to them, Keyes possesses the persistence to sniff out a fraud.  After 26 years of dealing with cons trying to swindle him, Keyes is well aware things are often not what they seem.  Though it seems like Mr. Dietrichson was simply unfortunate enough to fall off a train, Keyes-using his sharp reasoning skills and impressive statistical knowledge- comes to recognize such an accident’s impossibility. What’s the likelihood that someone takes out a $100,000 accident insurance policy only to die a few days later?  and in such a rare way?  One out of billions.  While no one seems to question the plausibility of a man meeting his demise by falling off a slow-moving train, Keyes begins to correctly suspect that the Dietrichson case is not an accident, but a calculated, rather cleverly plotted murder.

But who’s the killer?  “I always tend to suspect the beneficiary,” he confesses as Phyllis eavesdrops from the hallway, “Yeah, that wide-eyed dame that just didn’t know anything about anything.”  As Neff walks Keyes out, a trepidatious Phyllis hides behind the door.  Here, the mise en scene operates to build a nail-biting, almost intolerable sense of suspense: will Phyllis escape undetected or will Keyes see her and, thus, discover their guilt?  As viewers, we hold a privileged position and can see Phyllis hiding; however, from Keyes’s vantage point, the only thing you can see is Neff holding open the door.  The shot’s composition provides a masterful way to get viewers engrossed in the film, but more than that, it forces them to contemplate the thematic core of the story itself: the necessity of “looking closer.” Just as Neff appears to be standing alone in front of a door when in actuality his accomplice is hiding behind it, appearances can be deceiving.  If we are to locate the facts, Wilder argues, we must be like Keyes: skeptical, questioning, and relentless in our refusal to accept things at face-value. 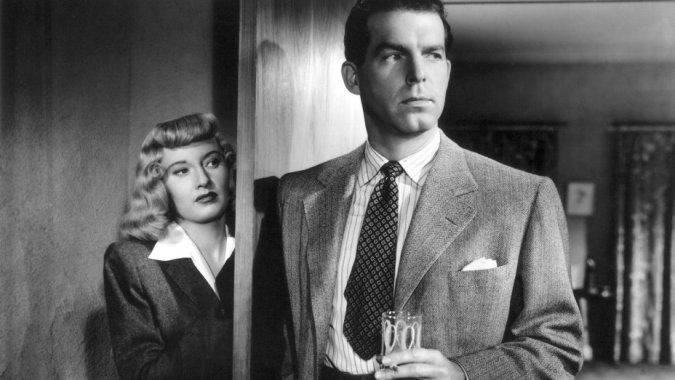