It is a truth universally acknowledged that reading contributes to the public good.  As any librarian or public service announcement will tell you, the benefits of reading are too many to count.

Not only does reading magnify our capacity for empathy and strengthen our ability to be open-minded, it fortifies the foundations of democracy itself.  On the societal level, literacy reduces crime, fosters freer, more stable governments, and promotes social activism.  Books empower us with the tools to be strong critical thinkers and bestow us with the gift of words to depict our world.  Books are museums, ways of preserving the wisdom of our collective past, and crystal balls that grant us insight into our possible futures.  Books are medicines that can cure almost any ailment, from the most life-threatening bouts of existential angst to more common cases of hard-to-place melancholy.  Books are lamps and life rafts, friends and teachers, time machines and time capsules.  “We read to remember.  We read to forget.  We read to make ourselves and remake ourselves and save ourselves,” Maria Popova once said.

British philosopher Alain De Botton insists reading has yet another benefit: it sensitizes us.  In our hyper-exposed era where we’re relentlessly besieged by sexualized images, tasteless profanity, and disturbing portrayals of violence, books offer a bastion against the inhumane forces working to desensitize us.  Rather than blunt our ability to feel distress at scenes of cruelty or anesthetize us to brutality, books make us feel: love, empathy.  And because they describe what we usually neglect— the wrinkled topography of someone’s face, the sky on a frost-bitten December morning— they can stir us from our semi-conscious stupor and remind us life is endlessly fascinating if we only pause to look.

In his charming self-help manual How Proust Can Change Your Life, the same trove of Proustian wisdom that taught us how to be happy in love, reawaken to the beauty of ordinary things, and avoid the enticing lure of platitude and cliche, Botton argues Proust’s adoration for British art critic John Ruskin is an example of the power of books to transform us.  Proust first discovered Ruskin when he was one thousand pages into writing his first novel Jean Santeuil.  “The universe suddenly regained infinite value in my eyes,” he said of reading the great Victorian author.  Proust was so taken with Ruskin that he abandoned his novel and spent the next three years translating his idol’s prolific body of work into French.

So why did Ruskin have such a tremendous impact on the budding author?  Botton hypothesizes in Ruskin “he found experiences that he had never been more than semiconscious of raised and beautifully assembled in language.”  Though at some level Proust surely recognized the grandeur of northern France’s great cathedrals before reading Ruskin, Ruskin helped him more keenly experience their beauty and, in so doing, restored to him a bit of the world.  In The Seven Lamps of Architecture, the influential critic minutely described one particular statue in Rouen Cathedral, a figure of a little man carved into one of the structure’s magnificent portals.  Proust had never noticed the statue before.  But by writing with the same heartfelt attention a portrait painter pays to his subject, Ruskin showed Proust that the statue was worthwhile and that, perhaps, life was as well:

“For Proust, Ruskin’s concern for the little man had effected a kind of resurrection, one characteristic of great art.  He had known how to look at this figure, and had hence brought it back to life for succeeding generations.  Ever polite, Proust offered a playful apology to the little figure for that would have been his own inability to notice him without Ruskin as a guide (“I would not have been clever enough to find you, amongst the thousands of stones in our towns, to pick out your figure, to rediscover your personality, to summon you, to make you live again”).  It was a symbol for what Ruskin had done for Proust, and what all books might do for their readers— namely, bring back to life, from the deadness caused by habit and inattention, valuable yet neglected aspects of experience.” 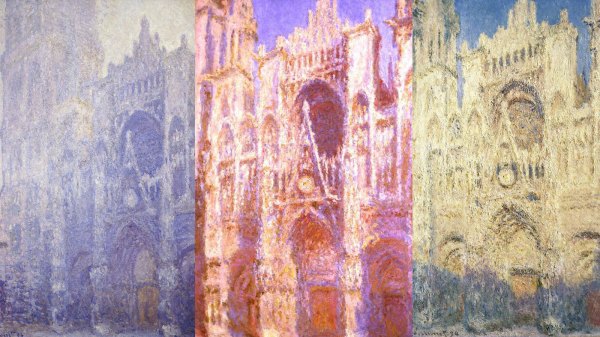 But though books possess the conscious-raising power to reinvigorate our senses and revive us from the numbing effects of over-exposure and habit, they have their limitations.  Yes, reading writers we admire can be inspiring (what a joy to revel in the inexplicable pleasure of a graceful sentence, a delight to discover a beautifully-crafted arrangement of words!).  And yes, a brilliant book can sometimes be an effective antidote for writer’s block: a prescription of Proust, for example, can inspire us to more deeply delve in our own characters’ psychology; a pill of Plath can rouse us to write with raw emotional ferocity; a spoonful of Anais Nin can rekindle our passion for the poetic aspects of language, leading us to play with figures of speech and write with more elegance and delicacy.

But when we worship an author too fervently, he becomes the cruel yardstick with which we measure our own efforts.  “Why can’t we write with Didion’s understated restraint?” we wonder, unable to scribble a single sentence since reading her landmark essay “Why I Write.”  “Why can’t my sentences sing with the lyrical simplicity of Solnit’s?  Or mesmerize with the exquisite beauty and intricacy of Fitch?”  It is often we bookish writers who find ourselves most debilitated by self-doubt and self-hatred.  Because we’re so well-versed in the canon— or, as Matthew Arnold once termed, “the best that’s been thought and said”— we possess a centuries-old library in the shelves of our heads, hundreds upon hundreds of volumes with which to compare ourselves.  When we craft a sharp bit of wordplay, we might momentarily delight in our own cleverness only to glance backward and see the towering presence of Shakespeare himself.  Our attempts at double entendre are god-awful compared to his.  Certainly our wit will never be a match for the bard’s!

So though reading is invaluable to a writer’s formation, too much reading can discourage us from writing at all.  After all, why put pen to page if x, y and z author has already said what you wanted to say and said it better?  Even the most talented writers have opened the pages of their favorite novels and felt a terrible sense of their own inadequacy.  Take titan of modernism Virginia Woolf.  Despite her indisputable genius, she— too— suffered agonizing periods of self-doubt after encountering what she thought was the work of a superior writer.  In a 1922 letter to English painter and fellow member of the Bloomsbury Group, Roger Fry, she raved about In Search of Lost Time, the magnum opus of Mr. Marcel Proust:

“Well – what remains to be written after that?  I’m only in the first volume, and there are, I suppose, faults to be found, but I am in a state of amazement; as if a miracle were being done before my eyes.  How, at last, has someone solidified what has always escaped – and made it too into this beautiful and perfectly enduring substance?  One has to put the book down and gasp.”

Reading Proust, Woolf felt nothing short of wonderstruck.  She was astounded by his facility with language, his ability to weave a story with both the “utmost sensitivity” and “utmost tenacity.”  So in awe was she of his talents that she came to question her own.  She wanted desperately to write like Proust but her attempts at imitation revealed— much to her dismay— that she could only write like herself.  Later she told Fry:

“Proust so titillates my own desire for expression that I can hardly set out a sentence.  Oh if I could write like that!  I cry.  And at the moment such is the astonishing vibration and saturation that he procures— there’s something sexual in it— that I feel I can write like that, and seize my pen and then I can’t.”

Even after writing Mrs. Dalloway, a masterpiece of never-before-seen stream-of-consciousness that would come to be regarded as one of the most important works of the 20th century, Woolf still felt herself lacking.  “I wonder if this time I have achieved something?” she confessed in her diary, “Well, nothing anyhow compared to Proust…he will I suppose both influence me and make me out of temper with every sentence of my own.”

Thankfully, Woolf didn’t let her admiration for Proust discourage her too much: she continued to write and would go on to publish such groundbreaking novels and essays as Orlando and A Room of One’s Own.  But hers is still a cautionary tale: we shouldn’t exalt human beings to the status of idols.  If our admiration for an author slips into adulation, if we glorify books as if they were bibles, we’ll eventually discount our own talent.  The result?  The Virginia Woolfs of the world will try to write the next In Search of Lost Time instead of To the Lighthouse.

2 thoughts on “Proust on the Benefits & Limitations of Reading”