What is war?  In its most literal sense, war is conflict between nations and soldiers on a battlefield.  But a domestic dispute over dirty dishes, an argument about abortion with our right-wing great uncle are their own kind of war.  War is just as much seething tempers and screaming matches as the thunderous hail of bomb blasts and gun shots.

The greatest (and perhaps most ironic) tragedy is that our closest relationships are often the most brutal battlegrounds.  In the heat of an argument, we understand our husbands and wives— not as people we love/adore/admire— but as hostile enemies we must overpower.  A lover’s quarrel is an attempt to defend your territory, a petty desire to be right and plant your flag in the ground.  When a marriage— or any relationship for that matter— becomes strained enough, the two parties can’t leave the battleground and actually talk.

So how do end war both in our own lives and in the greater world?  around the block and around the globe?  In her small but infinitely insightful Practicing Peace, Buddhist monk and forgiver of our all-too-human frailties Pema Chodron suggests war and peace have less to do with nations than with individuals.  After all, a nation will only attack another if its citizens harbor hatred in their hearts.  If we want to end hostilities between countries, we first have to be loving and open-minded ourselves. As Chodron so eloquently notes:

“War and peace start in the hearts of individuals…war begins when we harden our hearts, and we harden them easily— in minor ways and then in quite serious, major ways, such as hatred and prejudice— whenever we feel uncomfortable.  It’s so sad, really, because our motivation in hardening our hearts is to find some kind of ease, some kind of freedom from the distress that we’re feeling.

Someone once gave me a poem with a line in it that offers a good definition of peace: “Softening what is rigid in our hearts.”  We can talk about ending war and we can march for ending war, we can do everything in our power, but war is never going to end as long as our hearts are hardened against each other.”

It’s not news that political polarization is at an all-time high.  Recently, one study found that Americans feel disgusted by those who disagree with them— not just angered.  The liberal, for instance, no longer views the stanch conservative as a supporter of nationalism, small government, and free enterprise; he sees him as a ruthless, greedy capitalist, a bigot, a racist, an anti-Semite.  The conservative, on the other hand, no longer views the long-haired liberal as merely a lover of flower child notions like multiculturalism and income equality; he sees him as a threat to wholesome family values, a socialist, a menace to national security and the very foundations of American life.

In our polarized climate, it’s difficult— near impossible— to have a discussion with those on the other side of the political divide.  If a liberal and conservative do try to have an open dialogue about an important topic— immigration, climate change, black lives vs. all lives— they usually argue, not debate.  The aim?  To prove they are wrong and we are right.

The problem is if we close our hearts to each other, we’ll eventually close our minds.  When we make up our minds that an entire political party/nation is worthy of our condemnation, that they are wrong and we are right, we can no longer hear the other side.  As Chodron writes,

“The next time you get angry check out your righteous indignation, check out your fundamentalism that supports your hatred of this person, because this one really is bad— this politician, that leader, those heads of big companies.  Or maybe it’s rage at an individual who has harmed you personally or harmed your loved ones.  A fundamentalist mind is a mind that has become rigid.  First the heart closes, then the mind becomes hardened into a view, then you can justify your hatred of another human being because of what they represent and what they say and do.”

WWI and  WWII.  The Holocaust.  Hiroshima.  The 20th century was the most blood-stained in human history.  The total number of deaths caused by war during the last one hundred years has been estimated at 187 million, more than 10% of the world’s population in 1913.  If we want to create a world of concord and compassion and put an end to all this bloodshed and brutality, we have to soften what is rigid.

What, exactly, does this mean?  It means that when we’re feeling certain of our position’s moral superiority, when our beliefs are dangerously close to solidifying into dogmatic ideology, we fight to keep an open heart and an open mind.  The conservative Catholic shouldn’t condemn women who support abortion as murderers and degenerate sluts who have no respect for human life.  Nor should the radical feminist denounce those who are pro-life as puritanical upholders of the patriarchy and oppressive violators of women’s rights.  Will the two ever find common ground?  Most likely not.  But they can at least respectfully listen to each other’s point-of-view without resorting to school yard insults and self-righteous moralizing.

War in all its forms— from the micro-scale of personal relationships to the macro-scale of relationships between countries— only occurs when we adopt an us vs. them mentality.  They’re wrong, we’re right; they’re ignorant, we’re informed; they’re gullible idiots who believe any half-brained conspiracy theory on Fox News; we’re critical thinkers who fact-check and only read the New York Times.

This notion of “us” and “them” is responsible for the most atrocious of human crimes— the massacre of millions of Jews, the enslavement of African Americans, the subjugation of women since the beginning of time.  To stop violence of all kinds, we must never forget each other’s humanity: our opposition isn’t the enemy— we’re all on the same side.

Chodron might be an ordained Buddhist monk, but she— too— occasionally struggles to be compassionate and kind.  Outraged that her opposition is being so small-minded, Chodron decides he’s headstrong and rigid.  But after some reflection, she has a rather humbling realization: she’s being just as small-minded!  In order to have a real conversation, both would have to empathically listen and let go of the egotistic need to be right.  In the end, the goal of a conversation shouldn’t be to prove our position— it should be to gain some sort of wisdom or insight:

“I try to practice what I preach; I’m not always that good at it but I really do try.  The other night, I was getting hard-hearted, close-minded, and fundamentalist about somebody else, and I remembered this expression that you can never hate somebody if you stand in their shoes.  I was angry at him because he was holding such a rigid view.  In that instant I was able to put myself in his shoes and I realized, ‘I’m just as riled up and self-righteous and close-minded about this as he is.  We’re exactly in the same place!”  And I saw that the more I held on to my view, the more polarized we would become, and the more we’d just be mirror images of one another— two people with closed minds and hard hearts who both think they’re right, screaming at each other.”

With gentleness and humility, Chodron suggests loving, understanding relationships between nations begin with loving, understanding relationships in our day-to-day lives.  For more from one of the foremost Buddhist practitioners of our time, read how pain can enlarge your heart, how to break your habitual patterns and how to be courageous enough to grow up.  If you want more Buddhist thought, learn how to live intentionally from Thich Nhat Hanh and how to entirely inhabit the present moment from Alan Watts. 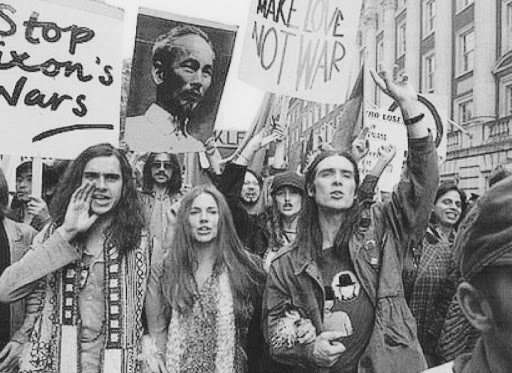