In Billy Wilder’s magnum opus Sunset Boulevard, the line between dream and delusion is as thin as its leading lady’s eyebrows. Out-of-work screen writer Joe Gillis (William Holden) finds himself ensnared in the delusion of aging has-been Norma Desmond (Gloria Swanson) when a car chase leaves him stranded with a flat tire in front of her decaying, Spanish-style mansion. Norma, a forgotten silent film star who believes she’s on the verge of a triumphant return to the screen, enlists Gillis to help her rewrite a script she’s been working on. As the film propels itself toward a shattering climax, we look on in a strange mixture of stupefied horror and disbelief: what lengths will Ms. Desmond go to maintain her illusion of celebrity? A disturbing tale about the obscured line between reality and fantasy, truth and deception, Sunset Boulevard exposes the dangerous-sometimes deadly- consequences of clinging too tightly to a dream.

Sunset Boulevard is predicated on a lie, albeit a little white one. When a couple of slick-talking car repossessors come to impound his 1946 Plymouth convertible, Gillis fibs: “The car isn’t here,” he cocks his head offhandedly, “a friend took it to Palm Springs.” The story seems too convenient to be plausible but-because they can’t prove otherwise-they leave him alone for the time being. Just when we think Gillis might get away with it, the two men spot him driving along Sunset. Though this brief encounter may seem insignificant except for the vital role it plays in driving the film’s plot (after all, there would be no story had Gillis never turned into Norma’s driveway), the fact that Gillis’s lie is eventually exposed reveals a theme critical to Wilder’s noir: lies-no matter how meticulously woven-will always unravel, even if they’re concocted of dreams.

A washed-up actress who deludes herself into believing she can make a come back, Norma epitomizes the sinister side of the Hollywood dream machine. Like the unfortunate Miss Havisham who refuses to take off her wedding dress after her fiance leaves her at the altar, she’s a kind of stopped clock. “Oh, I know you,” Gillis smirks when he stumbles upon her decrepit Sunset estate and finally recognizes her, “you used to be big.” “I am big!” Desmond counters in what has to be one of the cleverest retorts in all of cinema, “It’s the pictures that have gotten small.” But the truth is pictures haven’t gotten small: as the sweetheart of a bygone art form, she’s a monument of another era- obsolete.

Norma’s habitation is a symbol for her stasis. Outwardly, the Desmond estate appears like another 1950s style Beverly Hills home; inwardly, it reeks of the musty, erie castles and gothic noir of Edgar Allan Poe. “The whole place seemed to be stricken with a kind of creeping paralysis,” Gillis observes as he catches the haunting sight of her sagging tennis court and empty pool, “out of beat with the rest of the world, crumbling apart in slow motion.” Norma’s gloomy mansion is less a residence than a mausoleum, a tomb glorifying her former renown: inside, every inch of available surface exhibits a head shot of her at the height of her heyday. But, among the dozen of photos, not a single one depicts her as she is now: there are no pathetic, 50-something Norma Desmonds galavanting in gold frames- only pale, youthful Normas posing in pearls and silk gowns. Her ego-mania makes Narcissus look modest. But is it really herself she worships? No, Norma reveres not herself so much as the attainment of the dream these pictures represent. In much the same way that Gatsby clings to the fantasy that he’ll procure enough wealth to win his long lost love, Norma subsists on the illusion that she’ll make her comeback. But just as he can never fulfill his ambition of reuniting with Daisy and erasing their interlude of years apart, Norma-we realize- can never revive her former distinction in Hollywood. Why is her dream so unfeasible? For starters, she’s half a century old; Salome’s nearly half her age. Not to mention it’s practically unheard of for anyone to make a comeback after two decades. But figures and probabilities mean nothing to Norma: she always has a keen eye to the green light across the bay.

That reality will infiltrate Norma’s fortress of delusion is a fear that pervades Sunset Boulevard’s every shot. All the other characters, particularly Max, her devoted butler, work around the clock to safeguard her self-deception. Rather than let Norma face the agonizing truth that she has sunk into obscurity, he forges her dozens of fan letters so she thinks she’s still adored. “I didn’t argue with her,” Gillis admits when Norma refuses to let him cut yet another scene of her awful screen play, “You don’t yell at a sleepwalker.”

Though Norma seems to possess a grandiose belief in her own importance, there are obviously moments when her delusions fail her. Max reveals Norma experiences “moments of melancholy” and that there have been “multiple suicide attempts.” We witness one such attempt on New Year’s Eve when Gillis rejects her. Up to this point, Gillis has been living in a delusion of his own: either he’s somehow oblivious to Norma’s sexual advancements or he suspects her feelings but chooses to ignore them (who wouldn’t if it meant cruising through the Hollywood Hills in a leopard-upholstered Isotta Fraschinis and luxurious camel hair coat?). But when Norma dreamily envisions the fantastic year they’ll have together, there’s no doubt she believes them a couple: “I’ll fill the pool for you. Or I’ll open my house in Malibu and you can have the whole ocean,” she proffers dazedly, looking gleefully drunk, “When our picture’s finished, I’ll buy you a boat and we’ll sail to Hawaii!” Just as Norma denies the very glaring fact that she’s no longer a star, she pretends the much younger Gillis is her suave gentleman caller. She’s prancing around in make-believe when an infuriated Gillis rouses her up: “Stop it with this ‘us’ business!” he shouts. A masterful Swanson renders Norma’s every emotional nuance: her jealousy, her rage, her shock. As Gillis so wisely noted at the beginning of the film, “you don’t wake a sleepwalker…he may fall and break his neck.” The realization that Gillis doesn’t reciprocate her interest jolts Norma from her romantic reverie and forces her to confront a devastating truth: Gillis, this charming man she’s been trying to win with extravagant parties and solid gold cigarette cases, harbors no romantic feelings for her.

The rest of the scene stings with bitter irony: on what should be the most jubilant evening of the year, Norma tries to commit suicide amidst champagne and confetti. Though Gillis leaves rather swiftly after Norma confesses her feelings, he returns frantic when he learns Norma has tried to kill herself. “Happy New Year!” the taxi driver says smiling jovially as he races into the house. When a panicked Gillis rushes through the wrought iron door to see how she’s doing, Max takes him by the arm: “Careful. Don’t race upstairs…the musicians mustn’t know what happened.” Even in the face of mortality, the Desmond household wants to maintain appearances. But Norma can’t sustain the facade of normalcy any longer.

Wilder skillfully composes the scene that follows. Rather than depict Norma in her entirety, he shows her as a fragmented pair of feet and legs- we only see her face as a reflection when the camera turns right to an elegant standing mirror. Though mirrors in films noir traditionally hint at duplicity and often reveal a hidden potential for malevolence, Wilder’s mirrors behave as portals to a character’s inner world. The Norma we see in the mirror-distraught, weeping with bandages on her wrists-drastically conflicts with the image she projects throughout the film. In much the same way that Wilder juxtaposes Norma’s material abundance with her spiritual destitution by displaying her sobbing into a glamorous chiffon gown, he seems to suggest there’s a discrepancy between Norma’s outward and inner self. Despite her apparent vanity, Norma clearly remains unconvinced of her own boastful claims of being a “star.” 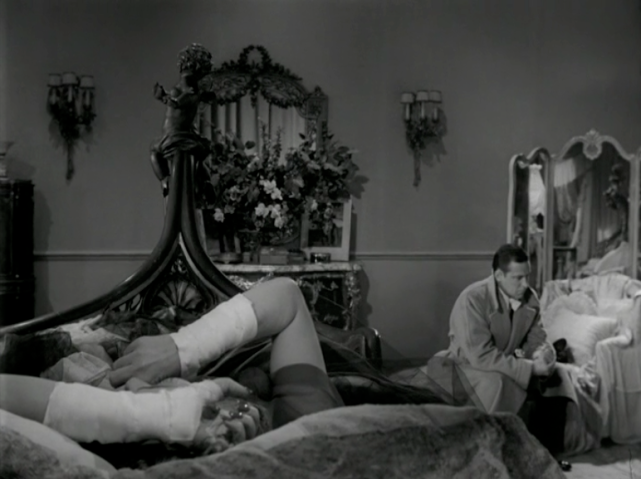 Delusion, it turns out, is a vulnerable thing: truth can always slip in through an unlocked door. The first time truth penetrates Norma’s citadel of denial it almost kills her; the second (and final) time, it kills her lover. Norma slays Gillis, I would argue, not because he breaks her heart, but because his desertion ruptures any illusion she has about her celebrity: “No one leaves a star,” she whispers in the foreboding silence, “that’s what makes one a star.” If the fundamental requirement of being a star is a horde of idolizing, reverent viewers, Norma doesn’t fit the bill: after all, her one “fan” has just stormed out. Would a Beatles fanatic really walk out on the Fab Four? For almost a quarter century, Norma has believed in the reality of a mirage but when Gillis leaves her, she awakens to the bleakest of deserts. There’s no movie with DeMille. There are no movie goers anxiously awaiting her return to the screen. “The audience left 20 years ago,” Gillis tells her out of equal parts compassion and spite, “You’d be killing yourself to an empty house!” Before his untimely (and rather undignified) demise, Gillis embodies an intimate relationship with truth Norma would rather avoid. In the end, murdering him stands as her most aggressive act of denial. 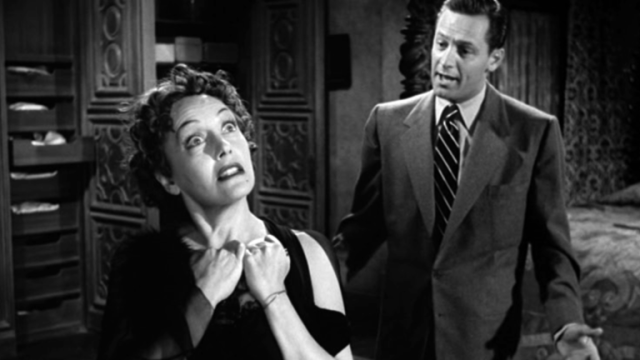 This is where Sunset Boulevard seems to pose a contradiction. On one hand, I have argued lies will always be found out. Gillis’s lie to the repossessors, Norma’s lies to herself: at one point or another, all these fabrications are exposed as false. But, in the end, doesn’t the lie prevail? Yes, the dream Norma had “clung to so closely” eventually enfolds her but at a serious cost. Besides a dead man in her pool, preserving her delusion costs Norma her sanity. So unflinching is her devotion to her dream that her denial explodes as full-blown psychosis. After shooting Gillis, Norma sits-deranged and disoriented-in a state of complete shock as police officers try to question her. The only thing she responds to is the mention of cameras. “Cameras?” she asks with crazed, wide-eyed excitement, “Excuse me gentleman, I must get ready for my scene.” Having suffered a total break from reality, Ms. Desmond believes she’s filming a scene for Salome when she’s actually making her way to police. There’s no audience, only a throng of reporters eager to cover the scandal. There’s no DeMille, only Max dutifully resuming his former role as director. And there’s no cameras, unless you count the ones filming the macabre scene for the 5 o’ clock news.

As she descends the grand spiral staircase in a dramatic finish, her “audience” appears transfixed, horrified by her total detachment from what she’s done. Franz Waxman’s mounting score only serves to escalate the scene’s terror. In a twisted, demented way, Norma captures the green light that’s eluded her. “What happens to a dream deferred?” poet Langston Hughes wondered, “Maybe it just sags like a heavy load.” Or, as in Norma’s case, perhaps it “explodes.”